Join us for monthly Balkan and other international singing 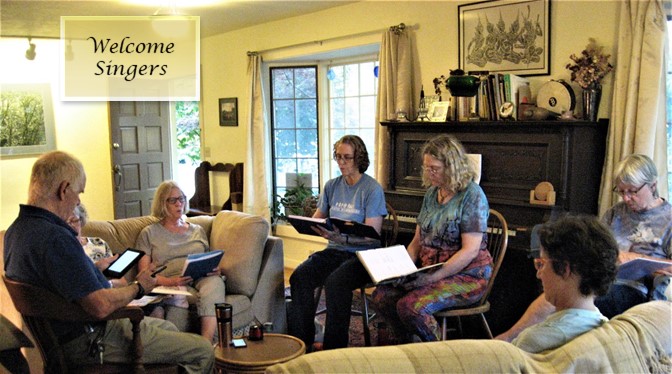 We are playing this by ear; no plans at the moment

Location rotates; contact Sally for details or to volunteer to host.

Veselo Song Book: has lyrics carefully matched to the recordings we most often dance to. If you spot errors, please let us know! Click on “Veselo Song Book” on the left to get these lyrics. Last updated December 27, 2021.

Please print lyrics for your own personal songbook or download songs to your smartphone or tablet!

The singing group now known as The Eugene Folkdance Singers started in August 2014, when the Willamalane Adult Activity Center in Springfield closed for annual maintenance. That’s where the Eugene Folk Dancers, a separate dance group, meet on Tuesdays. Many of the Veselo folk dancers also dance there regularly.

Having a Tuesday with no dance scheduled inspired Sally to suggest using that night for singing, and we met at a dancer’s home to learn some songs. Janet led us through the pronunciations and we practiced several songs. At the Eugene Folk Dancers’ summer picnic later that month a few songs were performed by a group calling itself The Sukmans, after a word in one of the songs. Janet, Sally, Casey, Ann, and Tasker sang Sabrali Sa Se Sabrali; Mori Shej; and Sto Mi e Milo. Janet, being the only one who could sing and dance at the same time, led the dance lines, while the rest of us sang a capella.

We got together to sing only sporadically after that, but enough to figure out we really enjoyed singing. Beginning in September 2015 we started singing almost every month, each time at a different singer’s home. Snacks after singing figured strongly in the first few months, but that tapered off, and now we just sing.

A big challenge was, and will continue to be, finding the right balance between singing just for fun, one song after another; and singing for optimum musical effect, with harmonies and dynamics. Sally is the organizer/notifier and Janet might be considered the “artistic director,” by choosing the songs each month (though that is subject to change). She is also our main helper for pronunciation. Since Maria and Katya, both natives of Bulgaria, began singing with us, we can rely on them for Bulgarian pronunciation. Mary takes classes in the Turkish language, and can guide our pronunciation there. In addition, we listen to the recordings and do our best to match what we hear.

A special bonus to the group is the inclusion of musicians Winnie Kerner, Ruth Anne Fraley, and Nora Holmquist. They are valuable resources as we learn parts and solidify rhythms. We have such great people singing!

Janet chose songs for which we know the dances. Over time, we hope that our group can sing for dancers; and/or that we can sing while we dance. As it is, when one of “our” songs comes up on the dance program, some of us elect to dance and others elect to sing; Janet is still the only one who can do both at the same time, but more of us will get there eventually!

In spring 2016 we started thinking about a group name, and in June we settled on the highly descriptive Eugene Folkdance Singers. We sing once a month, usually on a weeknight, at a singer’s home. All are welcome!!